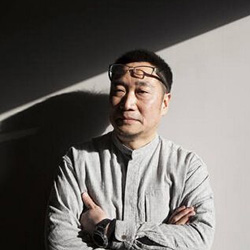 Gao Zhenyu graduated (1989) from Nanjing University of the Arts with a degree in Arts and Crafts, which coincided with an influx of Western creative concepts and ideas appearing on the Chinese artistic scene. Raised and trained within the confines of the Chinese pottery traditions, he was inspired by the freer expressions of Bernard Leach and Shoji Hamada. Taking a decision to broaden his views, skills, and knowledge he studied at the Industrial Design faculty at the Musashino Art University in Japan, where he obtained his Master’s Degree in Ceramics in 1993.

It was by distancing himself from his traditions and exposing himself to techniques of Japanese and Western potters that he appreciated the profoundness and endless opportunities traditional Chinese craft still had to offer.

Upon graduation from Musashino University, Gao Zhen Yue joined the Chinese National Academy of Arts in Beijing, where he established the Research Centre for Ceramic Arts in 1993, which he led for twenty-five years. As part of this initiative he tirelessly promoted the knowledge he had inherited as well as pioneering new creative approaches to pottery, making a valuable contribution to the history of contemporary Chinese ceramics.

Gao Zhenyu was featured in the Japanese documentary (made by NHK channel) ‘Travel Notes on Ancient Chinese Ceramics’ (2000). His works were featured in China’s Central Television (CCTV) documentary ‘Figures’ in 2001.

In his book Natural Beauty of Hibiscus Rising out of Clear Water, the renown academic and historian Feng Qiyong wrote, ‘Although Gao Zhenyu’s pure path to ceramics was tough, his works, mingled with grace and elegance, are scented by nature, thus making him an essential part of Chinese ceramic history.’

The artist’s works are now held in permanent collection at China’s National Gallery, the Victoria and Albert Museum, and Obaku-san Manpuku-ji temple, to name a few.

Copyright Mr-Shan.com. 2022 - All Rights Reserved
Back To Top